Precise focusing is one of the most important steps in achieving good astrophotographs. While there are several ways to focus a camera, knife-edge focusing is one of the most accurate. There is little if any doubt when you are perfectly focused. If you are unfamiliar with this method check the additional resources section below for other articles.

You can purchase a ready made knife-edge focuser (one of the best is the Mitsuboshi Knife-edge Focuser from Hutech Astronomical Products). You can also build your own easily and very inexpensively. This article will show you my method of building a knife-edge focuser. It is primarily aimed at 35mm camera users. The material to construct this should cost less than $10.00. Even if you use another focusing method or different knife-edge device this simple tool will help calibrate or verify your focusing.

None of this information is new, the concept is discussed by Wallis and Provin1. I built my first focuser after seeing Rockett Crawford's web page on building a simple knife-edge focuser. His design used clear plastic from a CD case to hold a piece of film that served as the knife-edge. Good idea so I made one. It works acceptably, but I found two problems with the design: the film will not lay perfectly flat and you can not cut a clean, sharp knife-edge on the film.

Choosing a different knife-edge material solves both those problems. I have chosen to use an automotive feeler gauge as the knife-edge. This is a precise yet inexpensive material that is readily available. It can be worked to a sharp edge easily. Which gauge is best to use for the knife-edge? This was a tough question I researched and decided on .006 inch for color negative film. Constructing a focuser from this material is simple.

Building the knife-edge assembly is easy. Attention to detail will ensure it works accurately. The difference between critical focus and soft stars can be as little as .001 inch (1 mil). You will need the following parts: 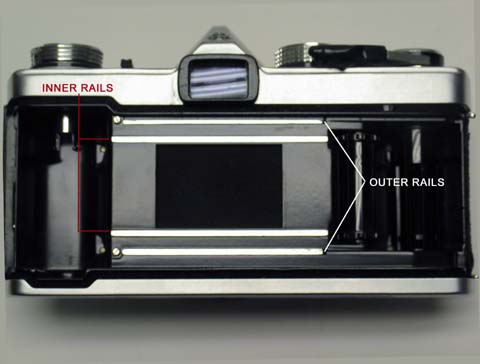 We are interested in resting a knife-edge assembly on the outer rails. If you have any doubts or questions please review the additional resources section and read additional articles. The following steps are the suggested construction method:

Undeveloped film consists of several layers of material. Figure 8 below is taken from a Fuji film data sheet2 and illustrates the various layers of color film: 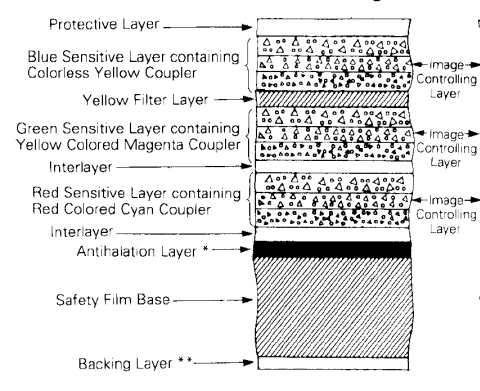 Fig. 8. Structure of color film, not to scale (Fuji Film).


If one knows the precise thickness of undeveloped film (nominal total thickness) then choosing a knife-edge size is simple. Using an identical piece of film for the knife-edge solves this problem very well. However, you can see that the very nature of film makes it a poor knife-edge since the emulsion layer is somewhat transparent and certainly not able to hold a sharp edge.

So exactly how thick is the emulsion layer? The only documented thickness information I have found is for Kodak Aerial film. The specifications for two aerial films, one color negative3 and one color reversal (slide)4 are listed below:

This data provides a useful guide for estimating emulsion thickness. It does not necessarily describe the actual data for popular astrophotography films. Within the Aerial film line itself there are variations in thickness. For example, there are two color reversal films with the same base material yet two different nominal total thicknesses5.

Kodak data sheets specify an acetate base thickness of 5 mils for every popular 35mm astrophotography film (note that this thickness is NOT true of all 120 size films) . Assuming the other layer thicknesses are approximately the same as listed above then a film like Royal Gold 200 should have a nominal total thickness between .006 and .0065 inches, depending on the exact layers used. The closest common feeler gauge (or shim stock) thickness is .006 inch.

Using an adhesive to attach the knife-edge to the backing plate raises the knife-edge slightly. I have chosen to use super-glue which spreads out to a very thin film under pressure. My latest dual knife-edge focuser shows a very slight focus difference between the two edges. This suggests a slight variation in glue thickness (assuming the edge bevel is the same on both knife-edges). I would like to experiment with controlling this in the future.

Over the past year I have field tested knife-edges of several thicknesses. These include .004, .005 and .006 inches. The latter has produced the smallest star sizes on film for me. The .005 thickness worked acceptably when the film remained perfectly flat, which rarely happens. In the future I plan on testing a .007 inch knife-edge.

The table below lists my suggested knife-edge thicknesses:


Technical Pan (2415) is the most difficult call to make. The Kodak data sheet 6 indicates a base thickness of 4 mils. The emulsion is considerably thinner than a color emulsion. I would suggest a controlled application of adhesive intended to provide a total height above the backing plate of .0045 inches. At this time I have not tested 2415 so I can not provide verifiable data.

It would seem the ideal focus point would be in the middle of the emulsion layer. In practice the exact focus point can occur within a small range, i.e. the depth of focus (DOF). The DOF is primarily dependant on three factors: the focal ratio of the telescope, the grain structure of the film, and the seeing conditions during exposure. The shorter the focal ratio of the telescope the smaller the DOF becomes 7.

This suggests that the knife-edge does not have to lie in the exact plane as the center of the emulsion layer. It may be most practical to have the edge at the top, or slightly above, the emulsion due to film flatness problems.

Film likes to curl. It curls both length wise and across its width to a lesser degree. The typical SLR camera is designed so that the film curls against the pressure plate thereby laying flat. This implies that you do not want to put tension on the rewind knob (in other words, do not tighten the film by rewinding it). If the film is pulled taught across the shutter opening it will not lie flat against the pressure plate. You will not know exactly where the emulsion surface is and your knife-edge focuser will not be at the correct focus position.

It is tempting to think that the inner rails of a 35mm camera are to assist in holding the film flat. This is not the case. The purpose of these two inner rails is to ensure that the film's emulsion surface does not make contact with the camera body when advancing or rewinding the film. In other words, they have nothing to do with holding the film during an exposure.

Unfortunately consumer SLRs were never intended to hold film flat for an extended period of time. It is very difficult to prevent film movement for exposures over a few minutes. When examining your camera the two most important points to watch for are a) adequate spring tension in the pressure plate and b) that the outer film rails on which the pressure plate sits are clean and smooth.

The following web sites have information on focusing and focusing techniques: