A night in the Flint Hills of Kansas

When your hobby is astrophotography things do not always go as planned. I intended to go out on the weekend during new moon, but the weather conditions for that looked poor. On Tuesday the forecast was for clear skies. So I decided to drive out to my favorite dark site in the Flint Hills and take a few pictures of the night sky. As a bonus the Oriniod meteor shower was just past peak. Perhaps I would see a few.

It was still partly cloudy while traveling so I was nervous it would not clear up. This is a two hour drive for me. Weather is dynamic and can change unexpectedly. Many times I've had unplanned clouds end my night. Shortly after arriving at my site I took the sunset photograph below. The clouds were moving off to the south. It would be clear as predicted! 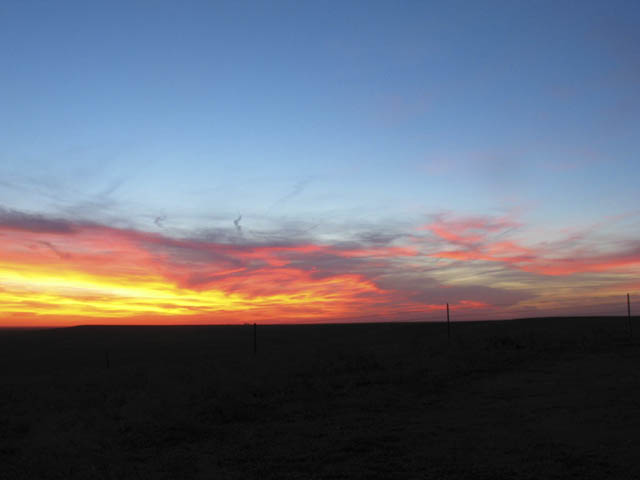 
The picture below was taken around midnight, just before my first 60 minute exposure ended. The camera was facing north, northwest. The wind was a bit strong for awhile so I moved my truck close to the photographing telescope to help shield it. The red glow at the base of the telescope comes from the LEDs on the drive panel and autoguider. The main telescope is two instruments together. The skinny one is a guidescope with a CCD camera on it and the fatter tube has the camera attached. In the background on the right is a second small telescope. 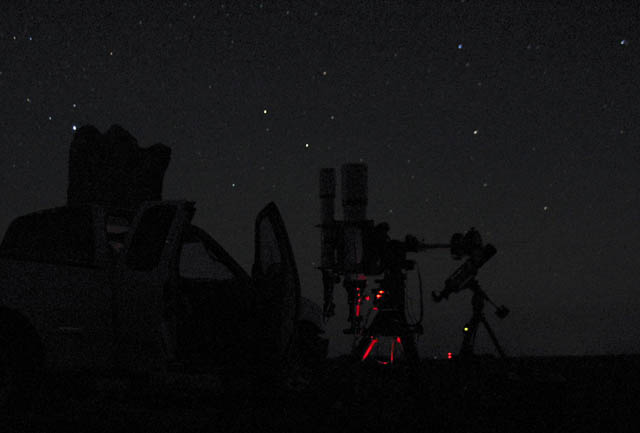 
About one hour later I was observing the sky when the next picture was taken. Facing southwest the sky glow from El Dorado / Wichita is visible behind my truck. By now the wind had settled down. For late October it was pretty mild at 55 degrees F. I was watching the sky for Orionid meteors, but they were very few and far between. 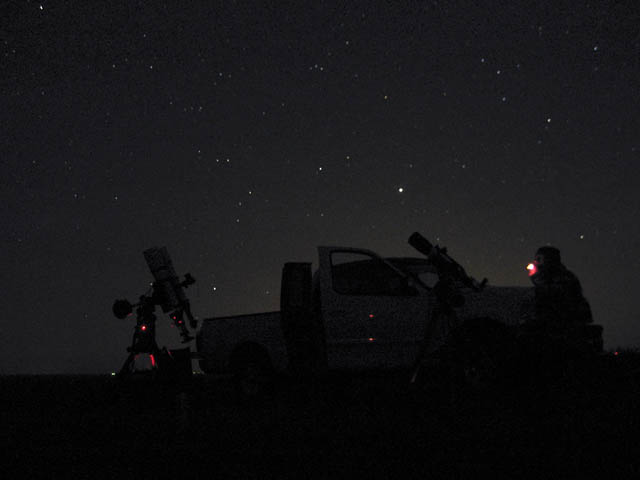 
Moon rise was about 4:00 a.m., but it was a sliver of a moon. Not until 4:30 a.m. did its light become a problem. At that time I started to pack up. While I'm heading home everyone else is waking up and driving to work. It had been a good night under the stars.

Astrophotography is not an instant gratification hobby. How would my pictures turn out? I dropped three rolls of film off that morning and picked them up a day later. Out of four long exposures taken that night one turned out good. Admittedly I'm picky. I do not rate a picture good unless it's near perfect.

The photograph below came about from a technical difficulty. The main camera I was using was a OM1 loaded with hypered Royal Gold 200 film. After three exposures the shutter jammed during a film advance. After messing with it a bit it became apparent I could not fix the camera. I decided to use my OM4 which had expired E200 slide film loaded in it. I was just testing that film (it's riding piggyback on the telescope in the picture above). I had not used the OM4 for this purpose before.

The image below is a single 65 minute exposure at f6 through the 130mm Starfire telescope. It has been adjusted for proper color, contrast and sized for web display. This is the first time I have used E200 through the telescope and I'm pretty happy with it. 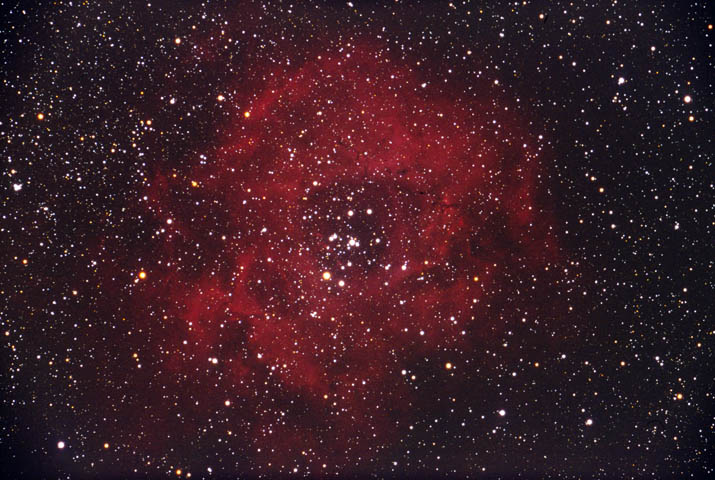 Now if I had just framed the picture a bit better it would have been perfect! Well, that means I'll have to find another clear, moon less night and shoot this target again. I see more trips to the Flint Hills in my future this winter.

In November I made a trip again and reshoot the Rosette Nebule with Royal Gold 200 film as I had originally intended. Combining the two different films together resulted in a nice picture. You can find it in the astrophotograpy gallery, or directly through this link.